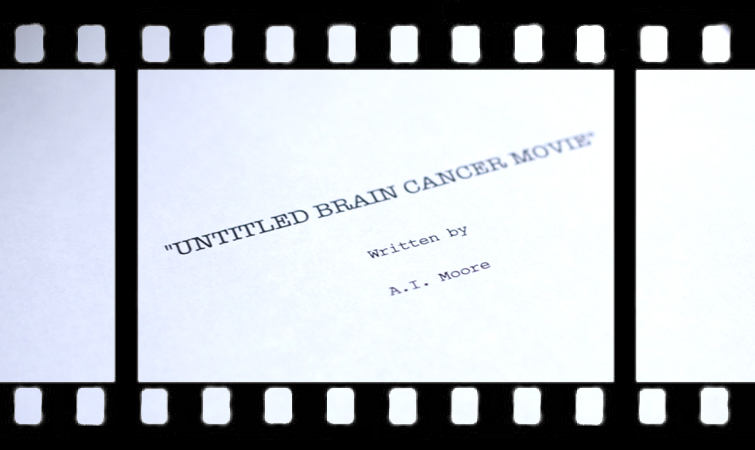 “Sometimes in life you step out in faith and it’s always a scary endeavor”.

I’m about to do something that is very hard for me to do but I know deep down that it will be very rewarding and I’m hoping it could also excite and unite the Brain Cancer community in a unique way. Over the past 8 months or so I’ve been developing a fictional film inspired by my journey with Brain Cancer and have been shopping it around. It’s a comedic (and I think unconventionally heartwarming) take on the Cancer journey, similar to the film “50/50” (that ironically came out in theaters the day I had my second surgery). There has been a ton of interest in and excitement surrounding the idea.

A couple months ago I was talking with a friend who is a pretty successful industry vet and they encouraged me to consider crowd funding (online fundraising). My response was “yeah, maybe when the script is done. I could raise some funds to get it going.”, and their response back was, “No…raise funds to write it too.“, they continued, “Now is the time to write it, when the experience is still fresh in your head. Otherwise, trust me, you’re never gonna write it and it’s never going to get made.” I was immediately resistant but the more I thought about it, the more I liked the idea. To make ends meet, these past few months, I’ve been jumping from project to project and I feel extremely scattered and stressed. Don’t get me wrong, I feel blessed to have stuff to work on, but the idea of doing this particular project at this particular time feels very much like a necessary oasis for me. Developing it so far has been a source of catharsis and the idea of taking a few months to solely focus on finishing the development process (by writing it) just feels right (because in many ways I’m still recovering).

I mentioned this idea to family and friends and they all have overwhelmingly supported it. I also mentioned it to a couple peeps in the Brain Cancer community and they immediately jumped on board to help spread the word. There are also a few industry pros that have climbed on board as well.  This was all the assurance I needed to try to implement this plan. It’s very much an experiment but one I feel is worth it.  It is also very important to me that I have the support and trust of the Brain Cancer community and that is ultimately what convinced me to go about things this way. I’ve met many wonderful people that have been impacted by this disease and having them be a part of the entire process allows the community to take some ownership over the film (which is important to me). Plus, when I’m writing, I like to feel encouraged and empowered, and if I’m supported, especially by those who GET IT, then that would make both the film and the experience making it all the more meaningful. I also can’t think of better motivation to get up in the morning and create than knowing people are investing in me and counting on me to see this through.

We’re breaking this up into two phases. The goal for PHASE 1 is to raise $15,000. That will allow me to take the next several months off to focus solely on writing the script as well as hiring a professional script consultant to get the script polished to the point to where we can enter PHASE 2, which is finding financing to make the film (although I write professionally, I would like to get someone with objective feedback in there to ensure quality). There are many ways we can go once reaching the second phase, but making the development of the story the priority, is the only to make any of those options even possible (and something that shouldn’t be rushed).

The film business is a very complicated industry to explain to people who aren’t involved in it so there is going to have to be a step of faith and trust on your part if you decide to support me in this process… but just know that I promise to be a good steward of whatever resources are given to me and there is nothing I enjoy more (and frankly am better at) than creating and telling stories through the medium of film. If and when this happens… knowing that I would be able to use this project as a potentially major way to spread awareness about the unjust disease that has profoundly affected me and my family (and way too many others) it will make all the pain and suffering I’ve had to endure worth it.

If you want to learn more about the specifics of the project, and perhaps donate, here is the link: http://www.gofundme.com/aimoore

One thought on “Let’s make a movie!”