The Dash: A Tribute to Our Son

It’s really hard to share this publicly but we know that there are a lot of people that love and care about us so we thought that it was important to do so. As if dealing with Brain Cancer wasn’t enough, it grieves me greatly to inform you that Amy and I lost our “Little Moore” last week…

Fifteen minutes…that’s how long we had with him before he passed. It was far more time than we could’ve asked for especially since we had prepared ourselves to not have any time with him at all. Even though the disorder he had gave him some physical deformities, in our eyes (and the eyes of the family that surrounded us) he was perfect.  For fifteen minutes we got to see and hold an angel and it was amazing. Words will never be able to express how profound the experience was for us. The Lord was gracious to us during the entire process and the gift of those fifteen minutes will forever influence the way we’ll remember this terrible ordeal.

When we first learned about the fate of our baby we immediately decided that we would give him a name. It had to be the right name, a name that had a special meaning to us. On the list of boy names that we had compiled, one name stood out above the rest, “DASH”. It’s an English name that means, “From the ash”.  We liked it because it referred to the idea of resurrection. As we started to mention the name to others, we were told about a poem called “The Dash”. 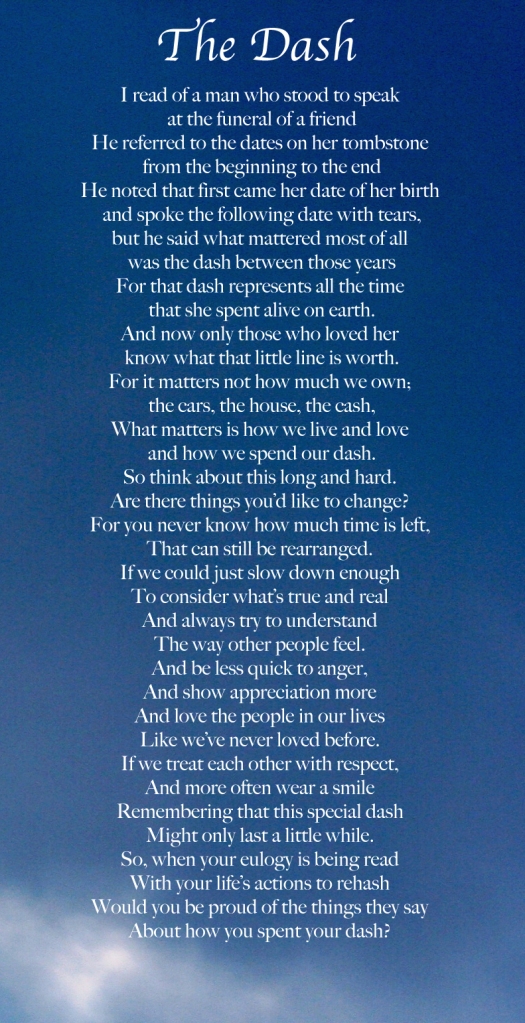 Reading the poem helped us to find purpose in losing our son and so we knew that “DASH” was definitely his name. We realized that he would be a reminder to us (and our family and close friends) to love generously, to be gracious to others, and to make the most of our “dash”. When it came to his middle name, we went with two, “IAN”, which is my middle name and means, “God is gracious”.  We had a friend who told us that when she was praying for Dash, the name “SOLOMON” kept coming to mind. Solomon was on our list already so we took it as a sign and thought it fit too because it means, “peace”.

We greatly appreciate your thoughts and prayers as we continue to grieve. In the previous blog post, where we announced that we were pregnant, I wrote that, “our story is continuing to change from death to life.” In the midst of this tragedy it’s hard to believe that statement, but if I’ve learned anything in my dash, it’s that the best stories have greater stakes, so we’re accepting that this challenge is a part of making our story greater…knowing wholeheartedly that it’s not even close to being over yet.

Rest in Peace Dash. We love you and we’ll see you again!!!

10 thoughts on “The Dash: A Tribute to Our Son”